Rome Consensus 2.0, the humanitarian manifesto for drug policy, launched at the United Nations 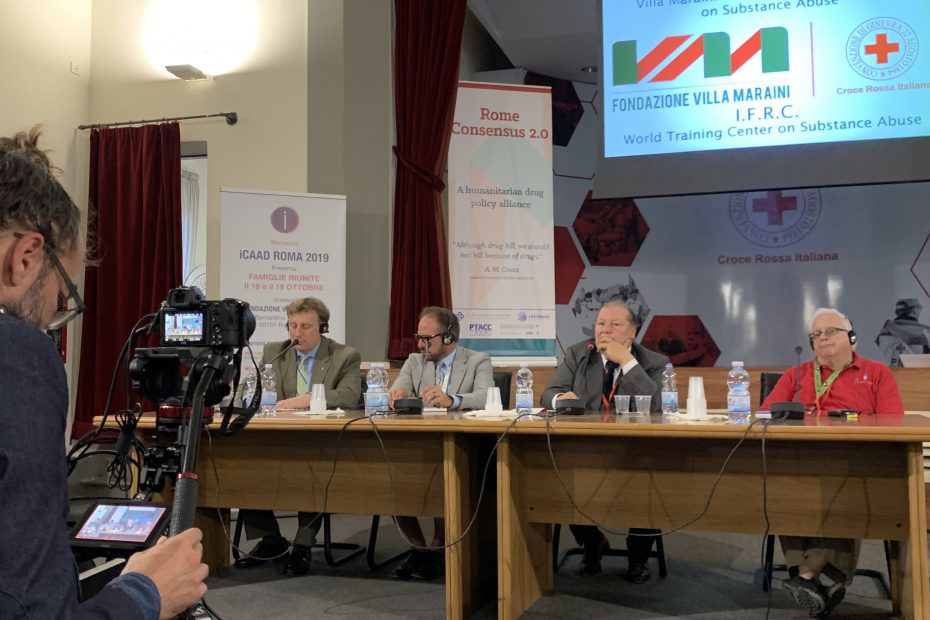 On the 4th of March, during the 63rd Session of the United Nations Commission on Narcotic Drugs  in Vienna, the Manifesto “Rome Consensus 2.0 – Towards Humanitarian Drug Policy” was launched during a side event organized by the Red Cross and Red Crescent Partnership on Substance Abuse, together with the C4 Recovery, the Levenson and Villa Maraini Foundations, and the Police, Treatment, and Community Collaborative organization (PTACC). These partners started a consultative process to build up this appeal one year previously.

Through this declaration, experts, professional bodies, and civil society organisations’ representatives and beneficiaries, called upon national governments to take firm and urgent moves to respond to the substance abuse problem in their societies, protecting the drug users’ health and rights. The Manifesto proposes pragmatic, replicable and evidence-based solutions, to give a more humane and effective answer to the increasing trends of drug demand and supply, to offer a viable alternative to repressive and inhumane treatment of people who use drugs, and to decrease the high loss of life caused by drug abuse:

·  An estimated 35 million people in the world suffer with so-called “drug use disorders”.

·  1 in 5 (more than 10 million people) is in prison for drug law offences. It is estimated that around one third of the people in prison have used drugs at least once while incarcerated.

This launch event was officially supported by the World Health Organization (WHO), the UNODC and the Permanent Mission of Italy to the International Organizations in Vienna.

The Manifesto’s main goals are:

– Accepting the existence of citizens who use and abuse substances, without stigmatizing and/or punishing them

– Implementing mechanisms to deflect and divert people encountered by law enforcement officers including those arrested for non-violent, individual use drug-related offences, and redirecting them toward treatment centres as an effective alternative to arrest and detention. This includes involving law enforcement officers and ‘first responders’ in providing overdose first-aid.

– Ensuring that the national policy response to drug use is non-violent and does not violate human rights and human dignity.

– Strengthening prevention, harm reduction, and multiple pathways to treatment and recovery services, inclusive of the children of the addicted.

Here below some statements collected from the panellists’ interventions:

“This Manifesto calls for essential measures that governments and civil society organizations can implement in order to improve the living conditions of those who are sick for drugs. Punishment and therapy cannot coexist. Therapy, through its long course, is the only way to improve the living conditions of who is suffering from a drug use disorder. The chances of recovering are proportional to the time spent in treatment. Help people to access treatment instead of being punished and tortured, is the first aim of this humanitarian initiative we want to spread worldwide”:

“For 100 years, the international community has pursued strategies to reduce drug markets and consumption that primarily relied on punishment and repression. Most governments now accept that we need to move to policies based on public health and social support. The Rome Consensus statement is a view from professionals of how to make this difference a reality on the ground.”

“Villa Maraini foresaw a long time ago, far in advance, those humanitarian policies of treatment that science is now proposing through guidelines. More importantly, Villa Maraini was the first to go in the street, taking many risks, to implement those measures necessary in order to save lives and that now we call “harm reduction”. I’ve known Massimo Barra for 30 years and we are still here to remind the world that there is much need for humanity to face the drug abuse issue. This Manifesto is totally in line with UNGASS document of 2016. Is addressed to the most vulnerable ones, to those drug users that Massimo calls sick for drugs and I would call “sick of vulnerabilities” most of them are totally marginalized from society. UNODC fully support these initiatives that put in practice the so called humanitarian policies”.

“At PTACC we believe that putting in place the newly emerging practices of police deflection and pre-arrest diversion, millions of police encounters occurring daily around the globe can be turned into millions of opportunities to connect people to treatment in their own community. Understanding that police are used and viewed differently around the world, where it makes sense that police do deflection, having them trained to take somebody to treatment, housing, and social services instead of taking them to jail or taking no action will open up new pathways for people to get the help and support they need for themselves and their families and children to get well. In this way, deflection provides a new direction for police in what they should do when they encounter people who are in need of drug treatment. Through adopting the practice of deflection and working alongside treatment, police can do their part to move us towards a global humanitarian drug policy as part of The Rome Consensus 2.0.”
Jac Charlier, Executive Director – Police, Treatment, and Community Collaborative (PTACC)

“I am, as people say, the living example of how this humanitarian policy can actually save people and change their lives. I was an inmate, a heroin addict, and I’m an Hiv+, but thanks to Villa Maraini and the Red Cross, I got back my life and now I help other drug users to change their own life. I’m here to give a voice to those who are not able to stand and raise their voice. Any decision about us can’t be made without us”

“To make the real difference we must minimize the negative effects of the social, legal and cultural criminalization of drug users. We can’t be silent in front of recorded violence and mistreatments that people with drug disorders must bear every day. For this reason, a humanitarian community like the Red Cross and Red Crescent, is mobilized in order to alleviate human.”

As WHO we are glad to see this kind of advocacy initiatives like the Rome Consensus since everything is written in the Manifesto is line with WHO evidence based and operational recommendations and guidelines on substance abuse. The humanitarian strategy is the right approach in order to shape policies and ensure access to treatment and mental health recovery for people with drug disorders. Red Cross and Red Crescent with Massimo Barra were pioneers of the harm reduction and humanitarian approach. We will always be supportive with this kind of initiatives.

“We are happy to report that there has been a profound change in American attitudes over the past five years.  The reason the Rome Consensus 2.0 is an advance is that groups, specifically the Law Enforcement community that previously led the War on Drugs, are now forcefully leading the charge to enact policy and practice change.  We can safely say that never in our wildest dreams did We foresee a day where we would sit, accompanied and supported by Law Enforcement officials, in front of Congressional policy makers advocating together for humanitarian addiction treatment.  We are at a hinge of history, but like all hinges it can move to open or shut the door. That is why the Rome Consensus 2.0 is so very important.  We need to keep pushing, as experience tells us that nothing as complicated and emotive as humanitarian policy initiatives can be taken lightly.”

If you did not sign on yet, please do it now and help us to spread this initiative more and more from this link:  http://romeconsensus.com/sign-on-preference/